Election season is just around the corner and as fully-functioning adults it is our responsibility to get informed about the politicians who could potentially be running our country. Society is built on the voice and concern of the public, and upholding democracy in the face of apathy seems to be the biggest struggle within our communities. Complaints ringing out about how elections don’t matter anymore, or about how politics are inherently corrupt seem like petty excuses not to participate in a system that relies on community presence.

But damn, y’all. Politics are inherently corrupt and it’s almost as if nothing matters! Climate change will get us all eventually, right? It’s so easy to get discouraged or bitter about the current state of our political climate. Facts don’t seem real anymore and it’s almost as if anyone can say anything without consequence. Either you’re too offended or not offended enough. You’re not informed enough, there’s a side to the story you don’t know, there’s always something else you could be reading, there’s always a bias you must be concerned about. The comments seem endless. It’s exhausting to keep up with. And I guess it’s understandable that people feel discouraged and frustrated by this. If you’ve ever heard people around you say “It never used to be like this” while referencing the politics of yesteryear, then it’s even easier to spiral into an existential crisis about the future of the country or even the planet.

In order to make a difference, and to hold individuals accountable, it is imperative that research is done and opinions are weighed fairly. Sure, everyone’s entitled to an opinion, but where did it come from? How did it become informed? Do certain people want you to think a certain way? Are the lizard people really here to take over the world? Do we even stand a chance?

This election season, it is crucial not only to actually pledge to vote in October, but to make sure you’re informed—and that the lizard people don’t try and sway you. As easy as it is to be cynical these days, your vote does matter and your voice should be heard. It isn’t enough to rely on your friends’ or family’s advice regarding politics. Politics become almost personal, especially when you start life as an emerging adult. I know it sounds corny—and these sentiments are probably a big reason individuals don’t participate in politics—but participating in elections and the democractic process is one of the only ways to ensure a better future for ourselves. It’s not easy to look at the world and cling to a juvenile hope of peace and prosperity. But, it is quite genuinely the only way to look at corruption with honesty. To picture a world in which you would like to live, and make all the noise in the world to try to make that image a reality.

Politics are boring, scary and uncomfortable to engage in. But now more than ever, it is vital that we become educated and well-versed in the platforms of all of the candidates eligible to receive a vote. Think, research and be smart about the decisions you make this election season. It has the potential to impact more people than you realize.

The reality of climate change is inconvenient for Alberta, except it isn’t

Relearn how to celebrate Valentine’s Day

Little Children: Why those in positions of power cannot afford to treat students like children 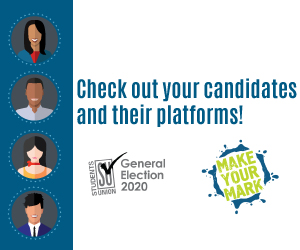